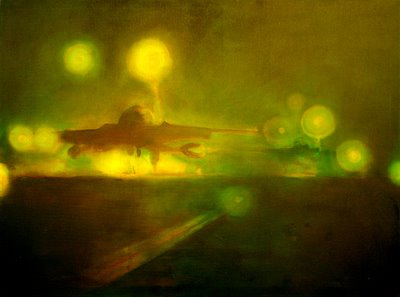 One of the last times I remember feeling a great family bond with my brothers was back in early 1991. The three of us piled into a Datsun 280ZX. Of course I being the kid bro had to lay in that uncomfortable hatchback/trunk for nearly two hours. We found the Giants playoff game on the radio finally, it was a tight game and we were all excited about Jeff Hostetler's wildy different style of play from that of the overly cautious, safe and luckily for our Giants injured Phil Simms. We were hooting and hollering over the game but there was an underlying nervousness in the car. The closer we got to our destination the more nervous we felt. My oldest brother Carlos had to be at that Air Force base promptly. He got the call that his unit was deploying to the Middle East, fucking Sadam was playing Hitler and my brother volunteered to make sure our boys didn't lose body parts. As we approached the base I got to hear a different jet sound. The hair raising thunderous sounds of fighter jets! Ah! My nerves were stretched with all sorts of stimuli; My brother was going to war, My Giants were almost to the Big Game, and these magnificent Jets! Well happily my brother has a family now, the Giants won that year and this painting exists.