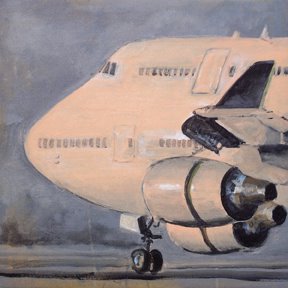 As a kid whenever I would stay over my father's apartment in that ghetto part of Passaic New Jersey, he would make a big deal about two things: Fire Trucks, which honestly scared the heck out of me , he'd enthusiastically wave me over to look out the window at the screaming Red monster that seemed to devour Myrtle Avenue. I would just sigh in relief if it passed the apartment building we were looking out of. The other were airplanes. Every time a Jet would start its final descent toward Newark I'd run to the kitchen to see my dad already standing with his characteristic hands-on- his- hips pose just staring out. "Mira el avion Yonni" he would repeat over and over. I swear we were both excited seven year olds each time a jet flew by. Sometimes when the steady gurgle sound of the jet dissipated, we'd go over to a great big poster of a DC 7 cockpit in the living room and he'd teach me what each lever and button would do, talking to me as if I were his co-pilot and not this kid who thought his pops was the bestest.