Back in the Alley Trading Hands 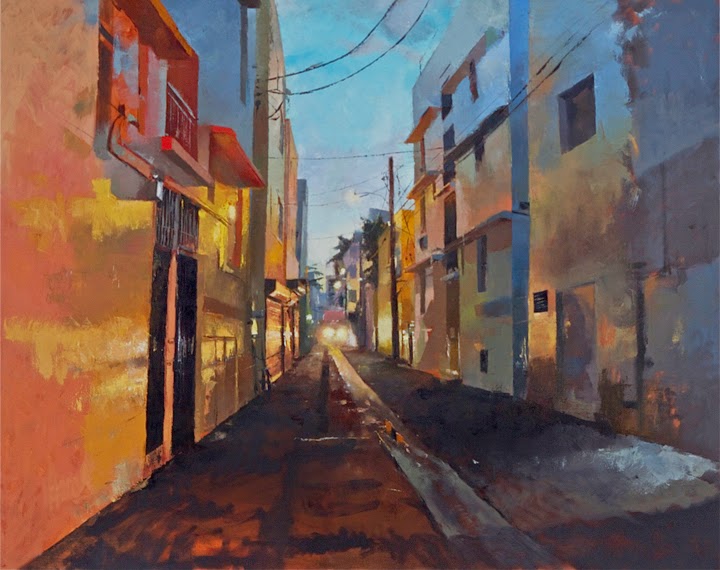 This is the first painting I have done that is finished with a palette knife. Over the years I have been wary of paintings done with a palette knife, too many have a sort of look that bothers me. I guess the context in which I have seen these kinds of works has something to do with it: they are usually boldly displayed in cheap frame shops. They tend to have a uniform finish as if no care was taken by the artist to follow the form depicted, any how, yuck! I have developed a speed over the years in beginning a painting, I think I followed the advise of an artist I briefly studied with around 2001 or 2002 at the Arts Students League Ms. Mary Beth McKenzie. She had me begin a painting over and over again. I think that the value I have gained in this practice was to really let go of any worries as it pertains to be too perfect. You gain a sort of bravery this way because you realize that paint goes on in layers, so that any seemingly "wrong" passage can be corrected with a few more well placed brush strokes. In addition, I took to heart the idea that we have many, many bad paintings in us that must get out of us to make space for a good one or two. I share this idea now to my own students. This painting was a case in which I felt I was "correcting" too much, so I gave myself an assignment: I could only paint one patch at a time with a palette knife, knowing full well that I'd have to slow down way more than I am used to. In the end I was struck with a new sense of appreciation for the craft of painting, in that the palette and the canvas act like stenographers and record every thing that is said. The struggles are there recorded on the work and its overall look is pretty rewarding to me. I hope you enjoy it. Thanks

P.S. Does anyone know where I got the title from? I am from New Jersey afterall

Unknown said…
One of my favorite ones... colourful and lightful :)
8:08 PM